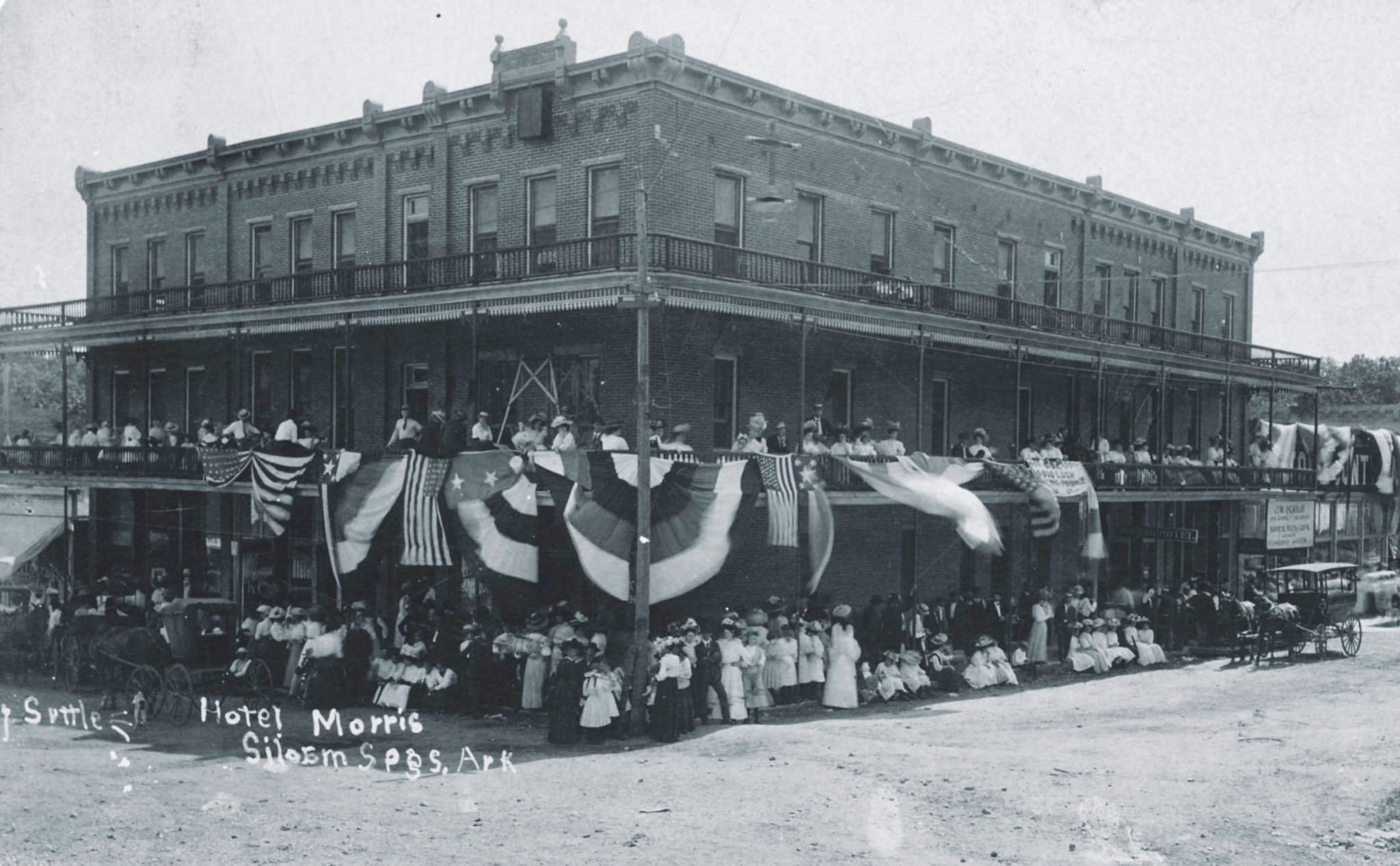 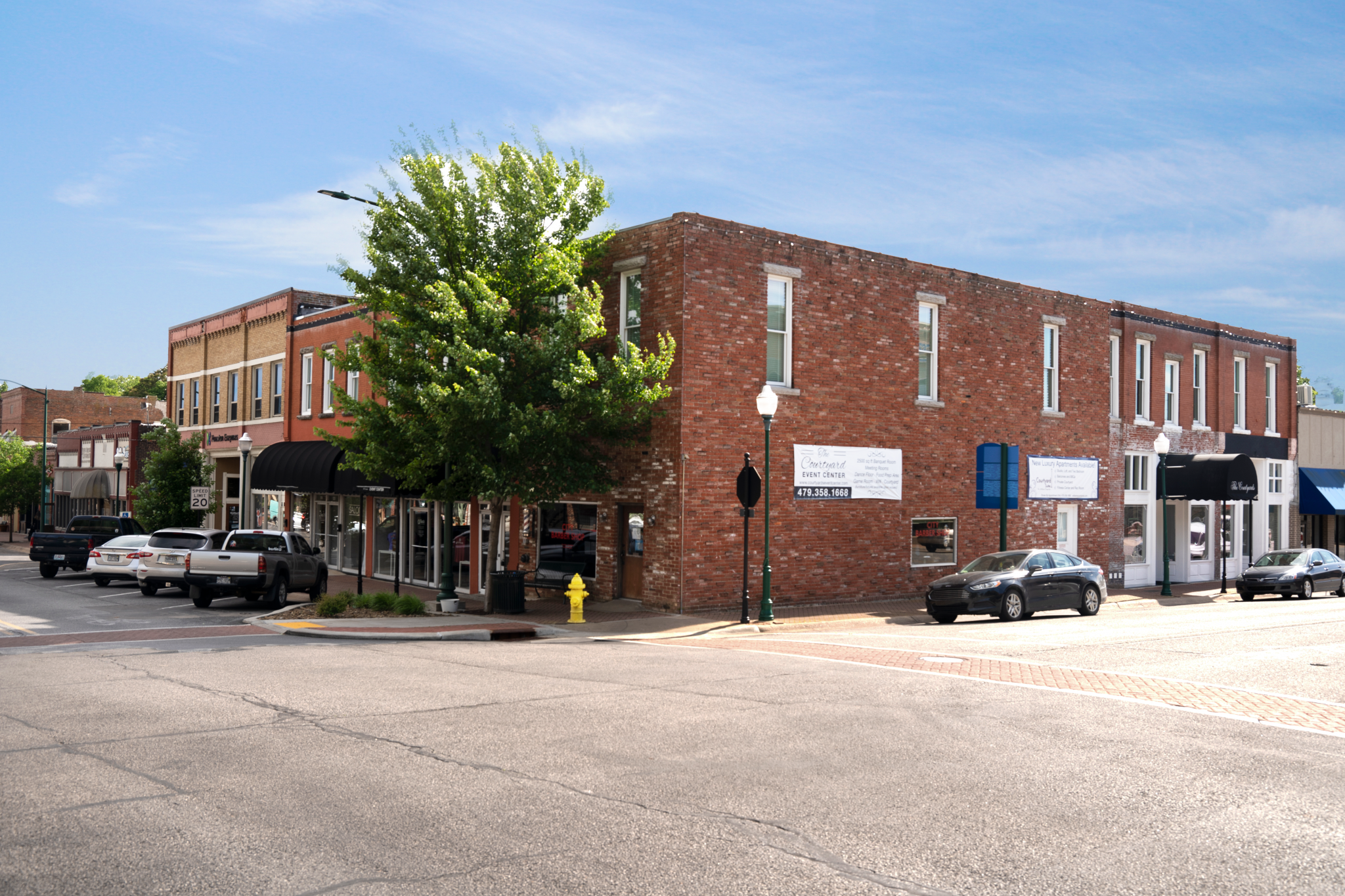 One of the most prominent buildings of Siloam Springs in the early 20th century, the Youree Hotel building—also known as the Morris Hotel—carries a legend of transformation and revival. Constructed in 1899, the structure first served Siloam Springs as the Morris Hotel. Previously, the site held a wooden two-story bank, the Bank of Siloam, constructed around 1894. This was the first bank in Siloam and was established by R.S. Morris, who moved from Iowa in response to the real estate promotion of the area. He organized the bank in 1881, moving its location from around the present site of the Masonic Lodge to the corner of University and Broadway in 1894. Though the bank failed in 1910, the hotel R.S. Morris built around his bank became a keystone of Siloam social life and economic activity for several decades.

The hotel was originally three-stories, featured wrap around “verandas” supported by iron columns on the eastern and northern elevations for the second and third stories. The structure presented front façades to both Broadway and University due to its prominent corner location. The building possessed a highly decorative stone cornice with brackets and finials, brick corbelling beneath, and a pediment on its eastern upper-story cornice. In addition, the upper story double-hung windows were framed with rusticated stone lintels and sills and the eastern storefronts were composed of wood with traditional recessed entrances, symmetrical display windows, bulkheads, and window transoms above.

Initially, the Bank of Siloam occupied the corner of the first floor, a stairway to the hotel upstairs rose directly from the northern elevation sidewalk, and the hotel dining room and ballroom were housed in the upper stories. A thorough description of the interior layout of the early 19th century business composition can be found in a newspaper clipping from 1970, documented in Hico, A Heritage—Siloam Springs History, Volume One (Smith, 1976).

The building underwent several alterations over the decades, observable in photographs taken in the early and mid-19th century. The narrow iron columns that held the verandas were enclosed in brick around 1918 or 1919 to protect the supports from damage by cars. While the brick, square columns were being built, the third-story balcony was removed. Around the 1940s, during the time of the Youree Café—which was housed in an eastern elevation storefront—the building’s balconies were removed entirely. During this time, the building was known as the Youree Hotel after Frank Youree took ownership. This is the historic name that is most associated with the building to current residents.

The Youree Hotel suffered a destructive fire in 1970, with the elevation facing University receiving most of the exterior and interior damage. In response, the structure had been partially re-bricked and the northern elevation was sheathed in yellow synthetic siding until the 21st century. Moreover, a large wood shingle roof had been installed over the lower portion of the front façade. The siding and awning were removed through a grant provided by Main Street Arkansas around 2014. Today, the building houses the Courtyard Apartments, the City Barber Shop (at the previous location of the Bank of Siloam), and Joni’s on Broadway salon.

Due to the damage by the fire, the building can no longer be considered a contributing structure to the downtown historic district; however, the building, National Register status or not, remains a significant actor and relic to the structural and social fabrics of Siloam Springs.