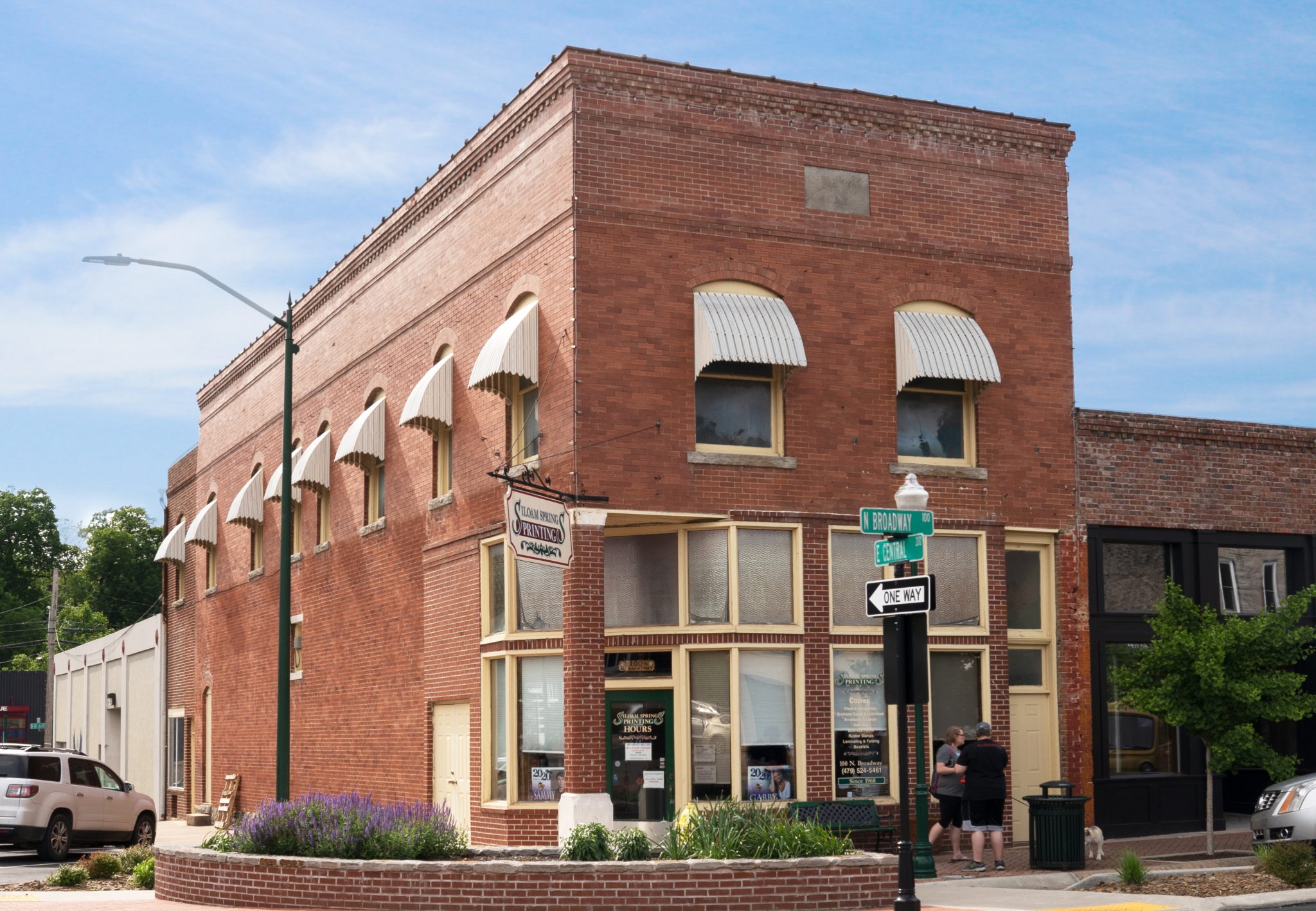 The Webster building was constructed in 1905 by J. M. Webster (see panel on parapet). This commercial building originally housed a pharmacy on the lower floor, known for a time as Central Drug Store, with medical offices on the upper floor. In the early 20th century, there was a law office in the upper story (sign visible on the entrance to the second story). The Central Drug Store mural sign can be seen in the early 20th-century photograph. Later the drug store became Sisco Drug Store.

John Brown Jr. purchased the building in the 1970s with a vision to turn it into a dress shop. The plans fell through and the building sat vacant for a number of years. The building was purchased in 1980 by Siloam Springs Printing, who has continually operated there for thirty-nine years. The business is managed by Glenita Gutherie. Glenita’s late husband, Doyle Gutherie, began his printing shop at the age of twenty-five, moving through several Siloam Springs locations until settling at 100 N. Broadway. Over the decades their shop printed for Northwest Arkansas newspapers, Allen Canning Company, and local small and large businesses. Apart from the Siloam Springs Museum, Siloam Springs Printing holds one of the most impressive collections of local historic photographs, including our downtown structures, aiding many buildings’ journeys to upgrade their status on the National Register.

The Webster building was constructed in the standard 20th-century commercial style. As a two-story brick masonry structure with a stone foundation, the building features a recessed corner entry supported by a brick column. Decorative brickwork exists along the upper story parapet, all transom windows are exposed, and rusticated sills are found under upper story windows. Concerning the interior, the building still displays its original pressed tin ceilings. The storefront has been altered with the removal of several iron posts, a brick column, and a corner display window (which is now a double-leaf door on the southern elevation). Originally, there was a bay-windowed storefront supported by iron posts between the main corner entrance and the entrance to the upper story. In the historic photo, an advertisement for Chancellor Cigars is seen on the display window just below the transoms. This section of the storefront was reconfigured and the iron posts were removed and replaced with brick masonry.

Additionally, there are now quarter round metal awnings covering the upper story windows. Though the façade was re-bricked at an early point in its history, this does not detract from the overall
historic integrity of the structure. The Webster building is considered contributing to the downtown historic district according to the National Register.
For more information on this building’s history, contact the Siloam Springs Museum at Don@siloamspringsmuseum.com. For information on building improvement consultation, grants, and tax credit opportunities, contact Main Street Siloam Springs at info@mainstreetsiloam.org.